“We read to know that we are not alone.” — CS Lewis

I could write about how this is a man’s world and it’s about time women’s stories were given the same weight (see how in Hollywood, rom coms are dismissed as fairytales while the male equivalent – superhero movies – are given lavish budgets, serious directors and endless sequels).

I could also examine why, given that more than 70% of fiction readership is made up of women, publishers have a category called “women’s fiction”, as if we’re a special interest group.

I could also explain how if more men read women writers, then it would help balance our violently skewed perspective of the world.

Instead, however, I shall praise these so-called women’s stories that I club under “charming reads”.

Tell me a story

Although mostly set in the first half of the 20th century, these tales are oddly familiar to my current 21st century life in South Asia: the “domestic” stories about family, marriages and small communities are set in a time of massive mobility and upheaval, where once-rigid social rules are rapidly falling away.

Most compelling, however, are the charm and grace of the characters. Women are not lamenting lack of husbands when they don’t have one, or battling it out when they do. They are far too practical about getting on with their lives. Probably due to their war-ridden era, they’re not a grumbling lot. In our current navel-gazing times, I find this doubly refreshing.

These are not “chick lit”, beach bonkbusters, or Harlequin/Mills and Boon romances. The language may be slightly antiquated, but the stories are witty, charming, and pleasing without being formulaic. “Gentle” they may well be, but they’re also cleverly plotted, highly amusing and offer incisive observations on human nature.

Brilliant palate cleansers (one too many Angry Novels and I need to restore my equilibrium), they’re also good for busy people who read a chapter a day, as the prose is more light than dense. I find them compulsive – cancelling dinner plans all too often, and staying up far too late. 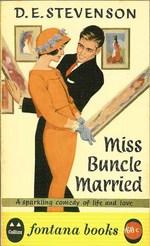 In Miss Buncle’s Book (1934) by DE Stevenson, Miss Buncle’s bank balance is low, and the only way she can earn extra money (having already considered keeping chickens) is to write. She pens a novel under a pseudonym based on her neighbours in her small English village, causing an uproar when the book comes out. Persephone Books re-issued the novel, along with two of its sequels, Miss Buncle Married (1936) and, my favourite, The Two Mrs Abbotts (1943).

Here’s another book about a writer, this one of knowingly terrible thrillers. Laura Morland is a 40-something no-nonsense woman with young people to matchmake, problems to solve, and a terrifyingly persistent young son to distract during school holidays. Angela Thirkell’s hilarious High Rising (1933) is the first of her Barsetshire series; I eagerly await to read the rest. Several have been republished by VMC.

Elizabeth Taylor (not that one) was described by Kingsley Amis as “one of the best English novelists born in [the 20th] century”. In Mrs Palfrey at The Claremont (VMC, 1971), with no relatives to look after her, Mrs Palfrey moves into a hotel of elderly people, and forms an unexpected friendship with a young writer named Ludo.

Barbara Pym’s whole oeuvre is worth reading. They may seem obscurely English – fretting over whether the village church is becoming too “high” – but her social comedies are lovingly observed. Her novels became unfashionable in the early 1960s until poet Philip Larkin championed her out of obscurity two decades later. Best known for Excellent Women (1952), I also thoroughly enjoyed A Glass of Blessings (1958) Less Than Angels (1955) and, my favourite, Crampton Hodnet (completed c.1940, published 1985). These Pym titles are published by VMC.

Her later novels, such as The Sweet Dove Died and Quartet in Autumn (nominated for the Booker) are a bit, well, grim – nobody paying attention to old people who die facedown into their bowls of soup, etc. Best to stick to her earlier works for something more cheery.

The title story from The Garden Party: and Other Stories (1922) by Katherine Mansfield made a huge impression on me from my first reading of it nearly 25 years ago. My other favourite in the collection is The Daughters of the Late Colonel. Published by Penguin Classics, it’s also in the public domain and free to download.

Nancy Mitford had no qualms in sending up her real-life fascist sister in Wigs on The Green, but her provocative wit and wry observations are best displayed in The Pursuit of Love (1945) and Love in a Cold Climate (1949), both published by Penguin.

E(dward) F(rederic) Benson is best known for his six novels in the Mapp and Lucia series (1920–1939) where the two neighbours vie to out-queen each other. Lucia’s loyal bestie Georgie rounds out the camp humour. This is best read with breathers, as spending too long in their company can get a bit tarsome. Published by Wordsworth Classics, some titles are also in the public domain.

I am mildly obsessed with American writer Marjorie Hillis, who certainly deserves her own dedicated blog post. An editor for Vogue magazine, she penned several how-to guides, which are remarkably still relevant today. Her first book, Live Alone and Like It (1936) was written for women who found themselves in a “solitary existence”, whether by choice or – more likely – not. Removing the martyred victim option right from the start, she offered brisk but stylish advice. This and the wonderful follow up, Orchids on Your Budget (1937), have been republished by VMC.

Smitten by her charming tone, I also hunted down those titles long out of print: You Can Start All Over (1951), penned after she became widowed following a late marriage, Keep Going and Like It (1967), and even Corned Beef and Caviar for the Live-Aloner (1937), a collection of recipes calling for an alarming quantity of tinned goods.

Alexander McCall Smith writes forewords to the new issues of some of these English social comedies (High Rising, Excellent Women), while being astonishingly prolific on his own. My favourite series by him is the No.1 Ladies’ Detective Agency. The 15th in the series The Handsome Man’s De Luxe Café (Little, Brown) came out in 2014, and – hurrah! – looks like there’s plenty more coming.

“Women have sat indoors all these millions of years, so that by this time the very walls are permeated by their creative force, which has, indeed, so overcharged the capacity of bricks and mortar that it must needs harness itself to pens and brushes and business and politics.” ― Virginia Woolf, A Room of One’s Own

Three films about the male psyche:

Cherchez Hortense (2012), directed by Pascal Bonitzer. What it means to a man’s sense of self when he fails to succeed at a task requested by his wife. A nuanced exploration of male identity in contemporary France.

8½ (1963) directed by Federico Fellini – one of my all-time favourite films. Marcello Mastroianni faces a crisis of identity as a filmmaker as well as a man. Not for nothing is his wife a smart, capable woman, and his mistress a bimbo. The famous fantasy “farm of women” scene reminds me how at once simple and complex men are.

The Country Girl (1954), directed by George Seaton. About how important success is to a man’s perception of himself, and despising the woman who would love him regardless. Bing Crosby plays an alcoholic washed-up actor and Grace Kelly his wife, with William Holden the director who gets entangled with their lives.

Written on the Pulse

4 thoughts on “Some Excellent Women”

Have you seen the blog? Here are some popular posts: